The Astrology of October 2013 – The Heart’s Reasons 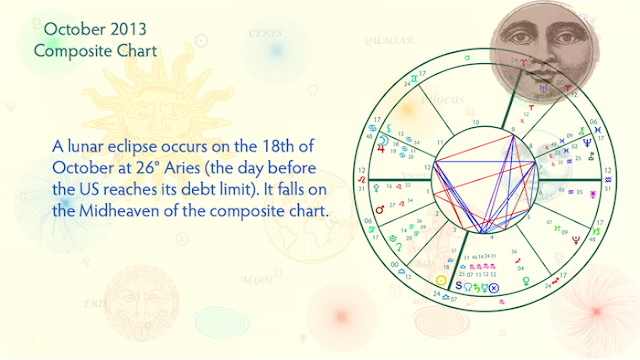 The Astrology of October 2013

Reasons of the Heart
September Recap
From June 2013 thru July 2014, at least, our primary astrological concerns are a Star Tetrahedron and a Kite. The Kite is the part of the Tetrahedron that manifests most clearly and persistently. The full Star Tetrahedron phases in and out in the background. 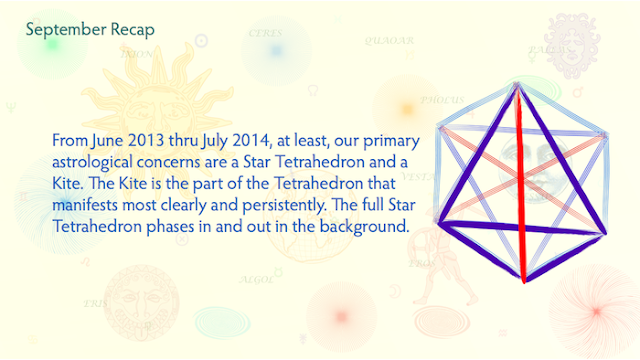 The effect is kaleidoscopic. Events come at us from wildly varying angles; we see the world from constantly shifting perspectives. We are compelled to change our ideas, our behavior and our institutions.
In September, the planets injected a moral and ethical element into the transformative process. A conjunction of Saturn and the North node galvanized our sense of right and wrong.
The planets build on this foundation in October. What began as an essentially economic and political transformation some years ago continues to broaden into a cultural, moral and spiritual transformation.
October’s Composite Chart
A lunar eclipse occurs on the 18th of October at 26° Aries (the day before the US reaches its debt limit). It falls on the Midheaven of the composite chart.
The Moon’s Nodes determine the time and place of eclipses. Hence, this eclipse is related to September’s Saturn/North Node conjunction and related influences in October’s chart. People who ignore the moral, ethical and spiritual mandate the planets issued in September, and expand on in October, will begin paying a karmic price. 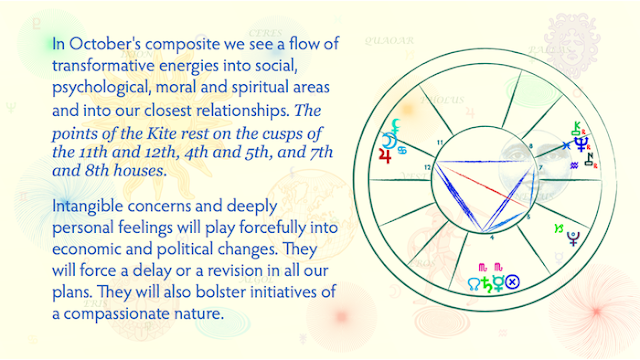 Toward Less ‘Convenient’ Relationships
In October’s composite we see a flow of transformative energies into social, psychological, moral and spiritual areas and into our closest relationships. The points of the Kite rest on the cusps of the 11th and 12th, 4th and 5th, and 7th and 8th houses.
Intangible concerns and deeply personal feelings will play forcefully into economic and political changes. They will force a delay or a revision in all our plans. They will also bolster initiatives of a compassionate nature. 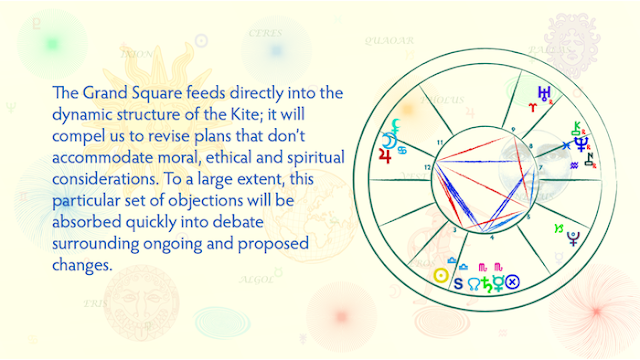 Survival of the Greediest?
The tendency was to expand our economic activities indefinitely and at the expense of our personal lives. Job requirements shaped our relationships, intimate and professional.
Those trends will be reversed in October. A Grand Square – Uranus/Pluto tensions now affecting our psyches – will block relationship changes motivated purely by economic convenience – yours or your employers.
The Grand Square feeds directly into the dynamic structure of the Kite; it will compel us to revise plans that don’t accommodate moral, ethical and spiritual considerations. To a large extent, this particular set of objections will be absorbed quickly into debate surrounding ongoing and proposed changes.
And there’s more. 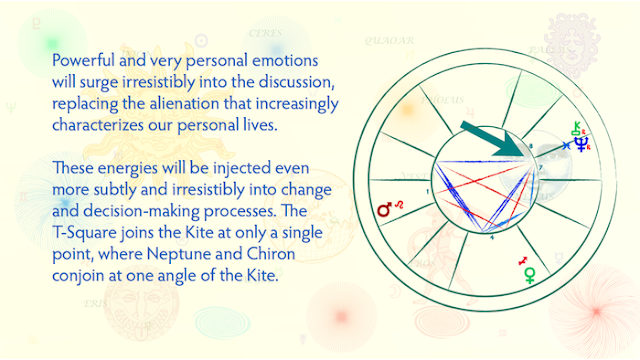 “The Heart Hath Its Reasons that Reason Knows Not”
Mars in Leo in the 1st, Venus in Sagittarius in the 4th, Chiron and Neptune on the cusp of the 7th and 8th all participate in a T-Square. Venus in Sagittarius in the 4th is at the apex.
This T-Square involves personal planets, signs and houses.  If the Grand Square raises quality of life issues, this T-square raises “quality of relationship” issues.
Powerful and very personal emotions will surge irresistibly into the discussion, supplanting the alienation that increasingly characterizes our personal lives.
These energies will be injected even more subtly and irresistibly into change and decision-making processes. The T-Square joins the Kite at only a single point, where Neptune and Chiron conjoin at one angle of the Kite.
Changes we make must now accommodate growing expectations for a spiritually, psychologically and emotionally richer life.
The Activated Conscience
October’s chart elaborates on September’s appeal to conscience. There is a stellium that encompasses the cusp of 4th house and extends into the 4th house proper.
This stellium strongly affects the entire chart. Directly opposite October’s eclipse on the midheaven, it will also seriously affect the evolution of our world view.
Our sense of shame, guilt, responsibility, our sense of right and wrong and social justice will be powerfully stimulated, again. We will also be motivated to speak our conscience. 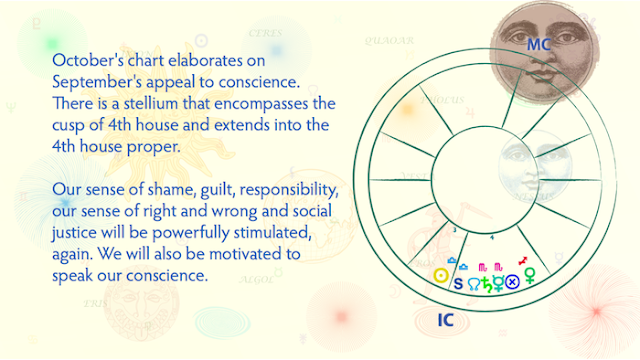 This stellium is as follows:
The following two indicators are best considered together:
A heartfelt call for justice, fair play and compassion resonates through the chart.
We ♥ Social Justice
A powerful upsurge of deeply felt personal emotion will reinforce the somewhat abstract call for justice and fair play that September’s Saturn/North Node conjunction brought.
Our desire for compassion will turn the transformational process from a purely political and economic affair into a global social reform movement.
The money-based consciousness of recent decades, devoid of conscience and authentic human emotion, will now be supplanted by a consciousness pervaded by conscience and authentic human emotion.
Posted by Carl Boudreau at 10:36 AM 4 comments:

I regret to announce that I will no longer publish individual Sun Sign forecasts after December 2013. December’s will be my final Sun Sign Forecast.

I have considered this move carefully and my decision is final.

It has been a pleasure and a privilege to provide this service, but it is time to move on. I will continue to post my monthly YouTube video and publish my monthly “big picture” forecasts.