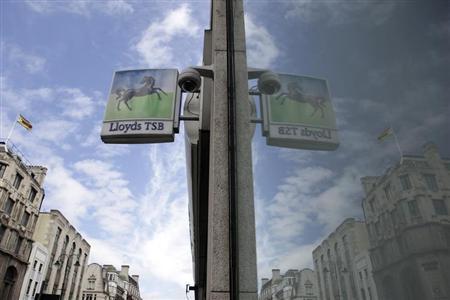 A sign from a branch of a Lloyds bank is reflected in a window in central London May 13, 2013.

The bank, 33 percent owned by the government, has now set aside more than 8 billion pounds to deal with the most expensive consumer finance scandal in British history, far more than any other bank.

UK banks have in total set aside over 17 billion pounds to compensate customers mis-sold payment protection insurance (PPI). The policies were meant to protect borrowers in the event of sickness or unemployment but were often sold to people ineligible to claim.

Lloyds reported an underlying profit, not including the PPI charge, of 1.5 billion pounds, up 83 percent on the same period the year before, reflecting an improved interest margin and lower costs and in line with analysts forecasts.

Shares in Lloyds, which last week hit a near four-year high, were down 3 percent at 0815 GMT.

The shares had more than doubled in value over the past year, enabling the government to start offloading the shares it acquired in a 20.5 billion pounds bailout of the bank during the 2008 financial crisis.

Numis analyst Mike Trippitt said the bank had reported a strong underlying performance, offset by further PPI provisions and losses on asset sales. He downgraded the stock to ‘hold’ from ‘add’, on valuation grounds.

Lloyds, now Europe’s fourth-biggest bank, is in talks with Britain’s financial regulator about the possibility of restarting dividend payments next year and will set out its dividend policy alongside its 2013 results next February.

“The bank is back to profitability. We are back to being a normal company so therefore we have started in this quarter discussions with our regulator. We are going to be a high dividend paying stock in the future,” Chief Executive Antonio Horta-Osorio told reporters.

The government began offloading its shares in Lloyds through the sale of a 6 percent stake in September and Horta-Osorio said he expected a further sale next year.

“I think it is very likely that there will be a significant other tranche (sold) in 2014,” Horta-Osorio said.