Down below video shows the futuristic looking yellow UFO docked at the ISS for just over two minutes with the Earth slowly rotating in the background. The video ends with ISS live feed going into blue screen mode.

This likely indicates that NASA cut the ISS live feed once it was realized that the video of the UFO docked at the ISS was going live to the world. The docking positioning of the UFO suggests that it is not the result of a camera anomaly but a genuine spacecraft of unknown origin. 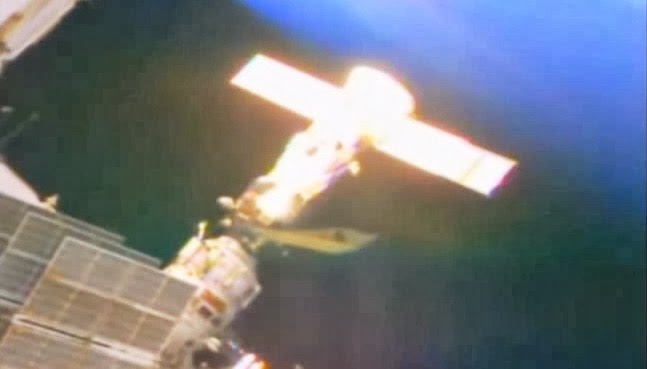 Video shows that the UFO was stationary and appeared to be docked with the ISS. The UFO is seen clearly in relation to the ISS thereby allowing for an accurate estimate of its size. One estimate was 10 meters in length.

While the earth slowly rotates, the UFO remains stationary suggesting it is not a lensflare, glare, reflected image or other kind of camera anomaly. A schematic of the ISS (see attached picture) shows the UFO was docked between the Soyuz escape module and the Russian research and service module. If a UFO was to dock with the ISS, this would be one of the five active docking locations where it could so in order for personnel to be transferred on to the ISS.

In past we reported, “French Scientist Proposes UFO Propulsion System using Magnetohydrodynamics“.
Down below is a sketch of proposed design of MHD power spacecraft which looks similar to what we saw in above video. 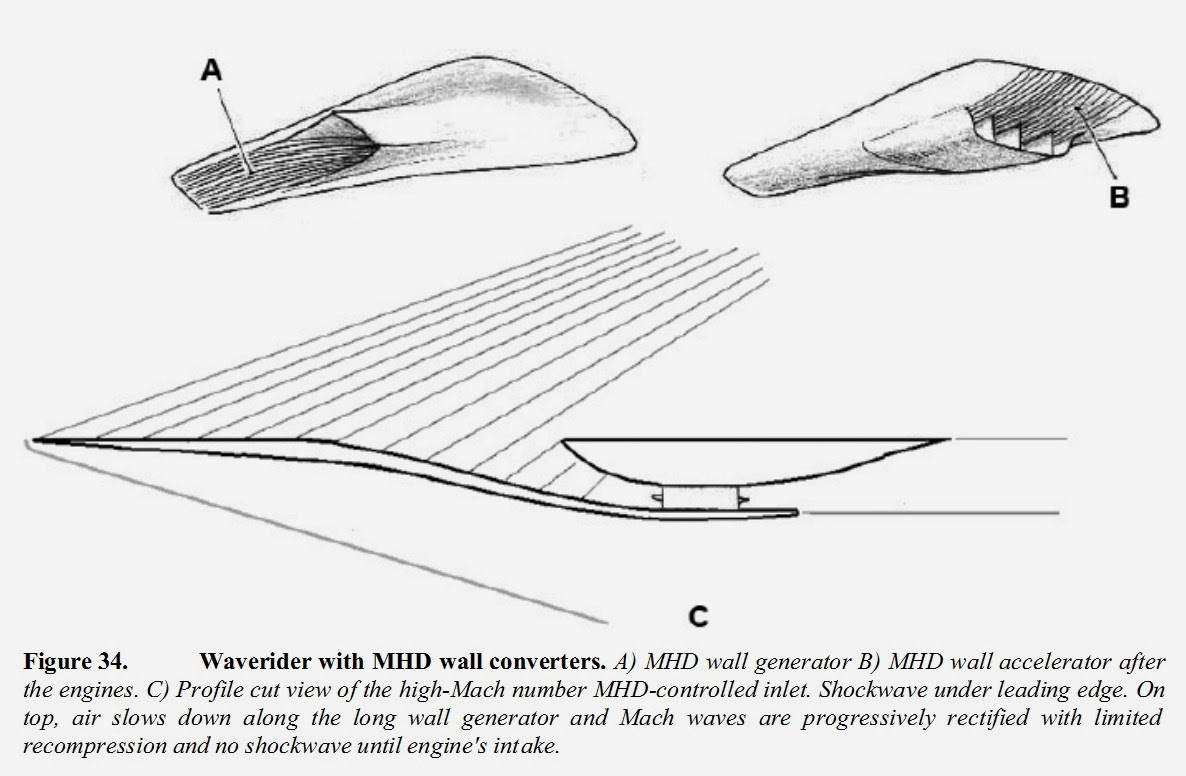 According to 2007 media report, magnetohydrodynamic (MHD) a concept explored by the power generation industry 50 years ago is being dusted off by NASA as a possible way of enabling jet engines to operate to higher speeds, to power hypersonic vehicles and reusable spaceplanes.
NASA has begun studying magnetohydrodynamic (MHD) energy bypass engine concepts under its revitalised hypersonics research programme, aimed at developing technology for a two-stage space access vehicle. The MHD energy bypass cycle could make it easier to design a combined-cycle propulsion system by allowing a turbine to accelerate the vehicle to hypersonic speed where a scramjet would take over.
Later in 2009, Subrata Roy, an aerospace engineer from the University of Florida, had also submitted a patent application for an aircraft powered by magnetohydrodynamics (a bulky title for the way energy generated as a current passes through a conducting fluid), WEAV would be able to lift off vertically and hover—”a saucer and a helicopter in one embodiment,” as Roy puts it.

The location of the docking is very suggestive. If the UFO had occupants, did they actually enter the ISS? Finally, why the blue screen at the end of the live video feed, was this done by NASA to cover up what was happening at the ISS which was possibly an unannounced visit? NASA has a lot of questions to answer.

Conclusion : There are two possibilities docked UFO at ISS could be a advance UFO Technology Spaceship develop for space exploration by USA/Russia or even a Alien spaceship.