“I talked to Roger Ailes, who I have know since I was 17 years old, he’s very sympathetic with this issue and saw the film Trace Amounts. I said to him, “I just want to go on one of your shows. Nobody will allow me to talk about this or debate me.” He said to me, “I can’t allow you on any of them. I’d have to fire any of my hosts that allowed you on my station.” Because he said, “My news division gets up to 70% of advertising revenues during non-election years from the pharmaceutical companies.””

The above statement was made during Kennedy Jr’s live-streamed speech in Washington, D.C. at The Revolution for Truth rally and protest. The event was held to call attention to the “withholding of truth by corporate, mainstream media” as well its abject failure in having become “nothing more than an instrument of government directed propaganda” according to the website. The rally and protest received only sparse coverage by mainstream US media outlets who ran mostly hit pieces – except for NewsWeek’s somewhat balanced piece – in order to omit and obfuscate some hard truths which corporate journalists would rather not discuss. It is telling that although the BBC, STAT news, and other corporate media outlets were present in D.C. for the event, it was only Spanish Hispan TV who ran a full report complete with video coverage.

Meanwhile, a larger move against independent voices and content creators is in play as this article is written. YouTube, owned by Google, has ratcheted up its next phase of online censorship by launching a rapid and sweeping demonetization campaign. Google’s cover story and explanation is that the funding cuts targeting its content creators is in response to complaints from their advertisers whose ads are appearing on questionable videos. Google’s flimsy reasoning held up for around 24-48 hours before many began posting their notifications of demonetization they were receiving from YouTube online. A common trend of targeting soon became clear.

The lion’s share of demonetization is being aimed at independent journalists, outlets, and creators who are giving inconvenient truths that run counter to the narrow corporate talking points of CNN, Washington Post, The New York Times and the like. In addition, the move by Google/YouTube appears to be a [desperate] response to corporate media continually losing the narrative, being beat to the punch by independent outlets, and the repeated dissemination of sound investigations exposing ongoing corruption and crimes throughout multiple levels of government and their captured agencies. The combined, open sourced and decentralized intelligence of independent journalists, outlets, and social media personalities are now regularly breaking stories and unpacking complex investigations for all to see daily. No controlled and centralized organization or establishment hoping to keep narratives isolated and confined within simple talking points stands a chance against what many have coined “New Media.”

One can deduce from Kennedy Jr’s statement that if big pharma wields such control over corporate media, they have perhaps the major controlling stake to keep truths that would threaten their bottom lines, monopolies, and control out of the public consciousness. However, their influence is waning and proof of the fall is becoming obvious. Recently, Ty Bollinger – founder and voice for the organization The Truth About Cancer – was interviewed on Universal Broadcasting Network’s new show Highwire by Del and Lee Bigtree. When asked how many people Bollinger’s two multipart documentaries have reached, he stated that to date, 20 million people have watched both The Truth About Cancer and The Truth About Cancer: A Global Quest. Bollinger’s new docu-series The Truth About Vaccines premiering free online is expected to greatly add to the totals already logging hundreds of thousands of signups before its premiere on April 12.

Google’s move, along with Facebook and Twitter, to censor and ghost-ban truth tellers is already backfiring. Seeing the censorship coming over the recent years, many sites like Minds.com, BitChute.com, Gab.ai, MegaUpload2, and others have emerged to grab large swaths of marketshare and critical masses of once coveted content creators. Each of these ‘version 2.0 media’ platforms have one thing in common, they all have free speech and fierce independence as major structural pillars of their platforms. In addition, they all have acknowledged that, because they are advertising as an open commons, their worth and marketshare is directly proportional to the freedom and assistance they give to the content creators that populate their platforms and spaces. All have, or are currently working on, various methods for their content creators to monetize their work, voice, and content. The Facebooks, Twitters, and YouTubes that represented the ‘social media 1.0’ experiment are now failing. Their continued operating agenda of censoring those who initially gave them value and built their platforms has soured the public consciousness. In fact, the ‘social media 1.0’ experiment can be looked at as nothing more than an attempt to data mine public consciousness for the purpose of selling our information to advertisers, squashing dissent, and as a method to steer and/or control initial narratives through algorithm-based censorship methods.

Another milestone and example of independent human voices coming together for truth to steer popular conversation is the newly infamous viral backlash received by Pepsi’s recent ad campaign. The ad/video – now pulled offline and out of circulation by Pepsi – is representative of the often completely out of touch advertising echo chamber within mega-corporate establishments. Using the backdrop of police force, protest, activism, and human rights Pepsi attempted to capitalize on humanity’s current atmosphere of upheaval and disenfranchised people fighting for truth, justice, and transparency. Pepsi’s ad is the very embodiment of sociopathic advertising devoid of empathy and the backlash it received was historical culminating in the Twitter message from Bernice A. King, the daughter of Martin Luther King Jr. shown below: 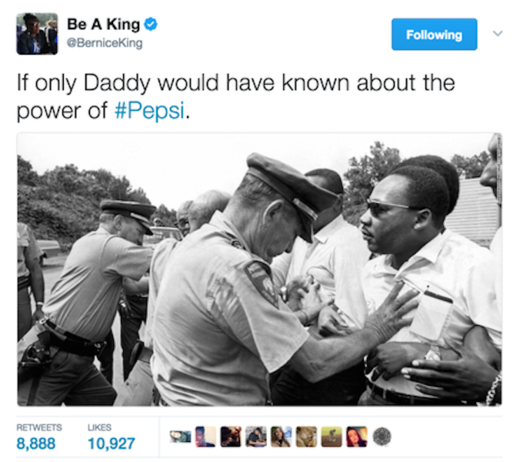