*This article is based on academic research referenced in David Wilcock’s The Source Field Investigations and his follow up book The Synchronicity Key: The Hidden Intelligence Guiding the Universe & You. I highly recommend you check out both of these books for further information.

DNA is essential to any scientific understanding of life. One strand of the double-helix holds the complete code that is needed to clone an entire organism. The process of DNA formation is one that is now up for debate, as the fundamentals of quantum physics aim to explain how DNA begins as a wave-form rather than a molecule. This new idea suggests that the universe is composed of an invisible wave-pattern complex that forms matter by the exertion of micro gravitational forces. On a molecular scale, information in the form of waves pulls atoms and molecules in to create more complex structures, such as DNA. So if these wave patterns were visible, empty space would appear as a fluid geometric patterns, such as the shape of a DNA strand, and would pull in atoms to form a physical replica of the wave-pattern. 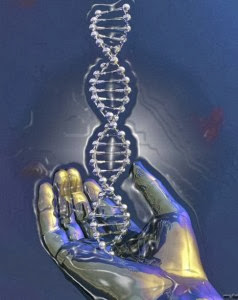 In a study published in the Journal of Physical Chemistry by London Imperial College Department of Chemistry, the idea of micro gravitational forces forming matter out of wave patterns was witnessed in person. Dr. Sergey Leikin placed different types of DNA in a salt water solution, and differentiated the various strands by coloring them. Remarkably, the colored DNA were drawn to one and another moving very far distances to find the corresponding matches, and in time every DNA strand was paired up correctly. Although Dr. Leikin equated the phenomenon with possible electrical charges, other research revealed that gravity was the likely culprit.

In an astonishing experiment performed by Nobel Prize winner Dr. Luc Montagnier, DNA was randomly created out of nothing but sterilized water. The experiment used two separate sealed test tubes, one containing sterilized water and the other carrying both sterilized water and DNA. After electrifying both tubes and letting the tubes sit for eighteen hours, Dr. Montagnier was surprised to see that the tube that had originally contained nothing but water had produced tiny DNA strands. This was a shock for many reasons, mainly because water only contains hydrogen and oxygen and a DNA molecule is much more complex. How could something like this possibly happen? It seemed as though the DNA had “teleported” from one tube to the other, like they were connected by an unknown force.

Could this experiment reveal that forces of the universe are constantly trying to form life where ever it can by hidden micro gravitational waves? In 1984, a Russian scientist by the name of Dr. Peter Gariaev discovered another remarkable property of DNA, in which each strand had the naturally tendency to absorb and store hundreds to thousands of photons (light particles). Dr. Gariaev placed DNA inside a small quartz container, and to his surprise the DNA absorbed every photon in the room. Gravity is the only force that we know of that can bend light so therefore Dr. Gariaev’s experiment reinforced the idea of a hidden micro gravitational force.

Things got even stranger when Dr. Gariaev removed the DNA from the quartz container. To his amazement the photons that had originally been absorbed by the DNA stayed in the quartz container in the exact shape of the DNA. Anyone would have thought that the photons should have scattered, but there seemed to be an unknown force keeping the photons in place. Dr. Gariaev blasted the photons with nitrogen gas to disperse them, and within minutes the photons were drawn back to the same area and formed the same “phantom” DNA shape. This experiment suggests that gravity has a quantum structure and can exist without the presence of matter, permeating throughout the entire universe. If our DNA can store light, then could cosmic rays have an effect on the structure? 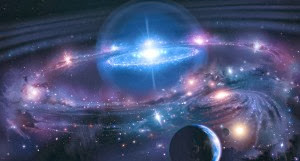 These discoveries could provide massive implications for science and our understanding of the universe. If gravity has quantum intelligent properties, then it could be proof that life exists or has the ability to form all throughout the universe. Further DNA studies revealed even more interesting abilities of the molecule when Italian scientist Pier Luigi Ighina was able to transform a living apricot tree into an apple tree by zapping it with DNA wave information. Ighina also zapped a rat with the DNA-wave of a cat, causing the rat to grow a cat-like tail within days. These experiments support the idea that DNA forms from information waves, and from this knowing we can suggest that our evolution may have been influenced by cosmic rays carrying encoded information from our Sun.

It is surprising that such astounding discoveries haven’t made it to the forefront of the mainstream media. These discoveries could change the foundation of physics and biochemistry as we know it. There is now evidence to suggest that an intelligent force is guiding the evolution of life throughout the universe which brings us another step closer to understanding the divine mysteries of our existence within the cosmos.