A YouTube poster who goes by the name Lou20764 had set up two cameras to record the passing of the International Space Station (ISS), which he successfully filmed but what happened next shocked him. He captured a UFO he says was the size on an aircraft carrier on video. 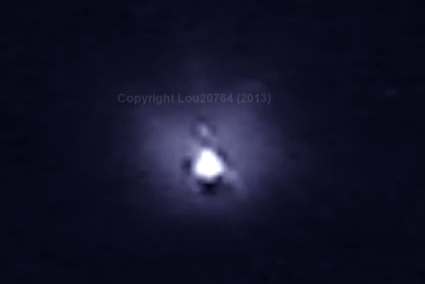 Author Whitley Strieber commented “For what it’s worth, I run a website that gets UFO information from all over the world. Sure, a lot of it is hoaxed. Usually simple hoaxes created by amateurs. However, anyone who sets up a system like Lou has and stays with it is going to get footage of genuine unknowns. They are not rare. Whether they are alien spacecraft or not is another question. Nobody can be sure. Butt there is no reason to doubt his footage just because he has a lot of it. He’s done a lot of recording.”

Louis Whitley Strieber (born June 13, 1945) is an American writer best known for his horror novels The Wolfen and The Hunger and for Communion, a non-fiction account of his perceived experiences with non-human entities. He has maintained a dual career of author (of fiction) and advocate of alternative concepts (through non-fiction, his Unknown Country website, and his Internet podcast, Dreamland).