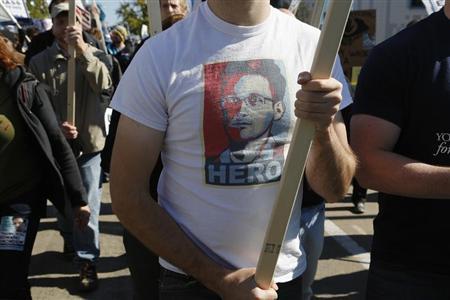 A demonstrator wears a T-shirt depicting former U.S. spy agency contractor Edward Snowden at the ”Stop Watching Us: A Rally Against Mass Surveillance” in Washington, October 26, 2013.

In an open letter to Prime Minister David Cameron published in the Guardian newspaper, 70 different press advocacy and rights groups from 40 countries said they were alarmed at the way his government had reacted, saying it had invoked national security legislation to try to suppress information of public interest.

Disclosures about the activities of GCHQ eavesdropping organisation and its cooperation with America’s National Security Agency (NSA) have embarrassed the government and angered many MPs in Cameron’s ruling Conservative party, who believe the leaks have harmed national security.