Anna Liesowska
The Siberian Times
Mon, 15 Apr 2019
Wooden statue 5.3m high with eight faces gazed over the water for only two decades, but leaves us with a conundrum 11,600 years later.

With its evocative main face and O-shaped mouth, its mysterious zigzag etched lines, the Shigir Idol is now accepted as one of the world’s oldest examples of monumental art. 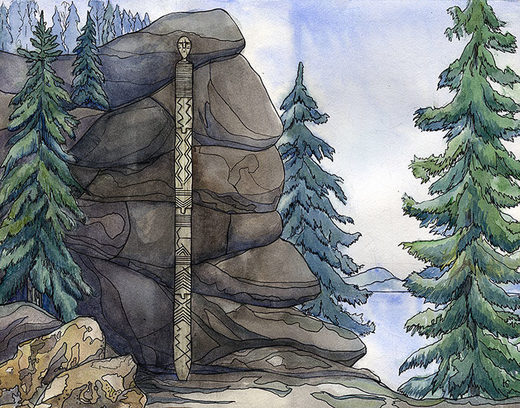 All the more remarkably, it is made of larch not stone yet still survives, thanks to it falling into a peat bog, once a paleo-lake, in which it was superbly preserved.

Now experts who know it best are suggesting some intriguing new theories about this ancient relic found late in the 19th century by tsarist gold prospectors. 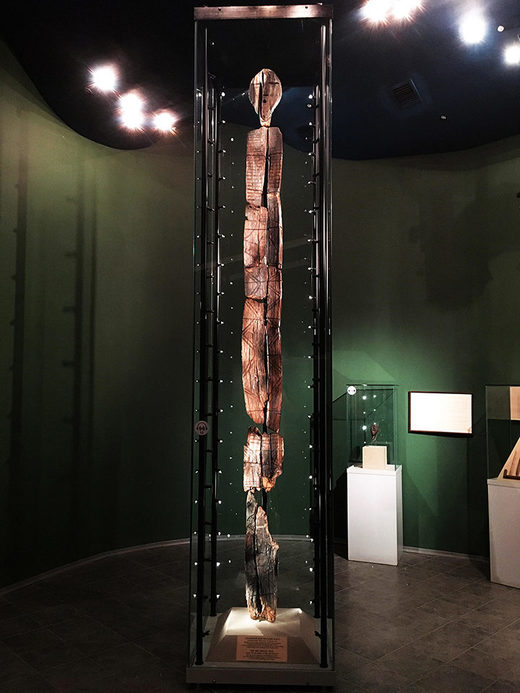 © Olga Gertcyk, The Siberian Times
The Idol is now kept at the Sverdlovsk Regional History museum in Yekateriburg.

One is that it is believed to have stood tall over the long-gone Shigir paleo-lake.

Another is that it held this position for a mere 20 or so years.

While some scientists have suggested it resembles a Totem pole, experts insist the lower part of the Shigir Idol was not – as might be expected – dug into the ground to support it.

Rather, it was propped up against a tree or perhaps more likely against a rock face on the shore of the water.

The idol has already shattered our understanding of early ritual art by the hunter-gatherers at the end of the Ice Age, all the more so when tests revealed last year proved it to be older – it was created some 11,500 or 11,600 years ago – than previously understood.

It reveals a depth of artistic talent unexpected before the onset of famers.

Department in Institute of Archaeology, Russian Academy of Sciences, has told The Siberian Times: ‘Based on the the facts I can clearly say that it was not dug into the ground, like Totem poles.

‘It was standing on a relatively hard, presumably stone, pedestal, because the lower part got flattened by strong pressure, and this sculpture was quite heavy. 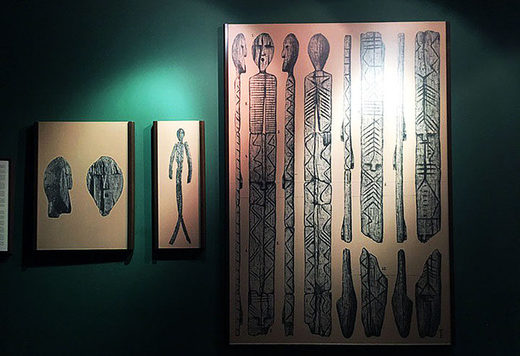 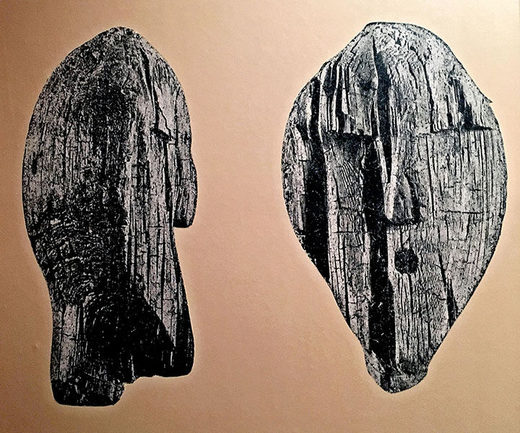 ‘According to the dendrologist Karl-Uwe Heussner, the Shigir Idol stood like this on shore of a large Shigir paleo lake for about 20 years; then a large crack appeared in the middle, followed by a series of smaller cracks.

‘The Idol fell into the water, floated for about a year, then sank to the lake’s bottom and formation of peat around it began.’

The idol may have been tied by strapping to harness it in place but was not held by another structure.

‘We did not find any trace of a counterforce,’ said Dr Zhilin. ‘If supporting beams or forks were used, it would leave clear traces, but we do not see them.

‘There was an idea previously that the idol could be put on a raft and was floating on the lake.

‘We have no data to confirm this.

‘It was definitely standing on some stone base in the open air and there were no supports.’

He surmised: ‘There are two options – it could be leaned against some rock or a tree.

‘You just need to remove several branches from, say, pine or fir tree, to get the suitable space for the idol; a leather strap might have fastened it into place or something alike to rawwhide straps that would not leave any significant traces.

‘I tend to think that it was standing near the water, in quite a secluded place.’ 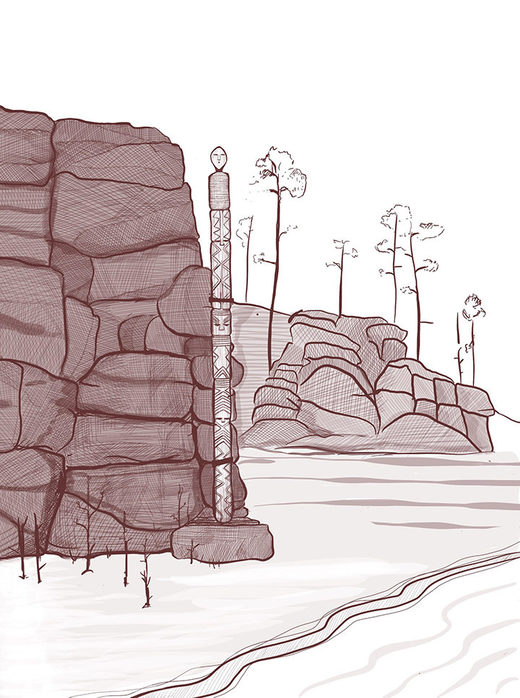 © Sasha Skullova/Olga Gertcyk/The Siberian Times
The Idol was made from a larch tree 11,600 years ago.

Dr Zhilin has also clarified claims based on earlier an scientific research publication that this Mesolithic Age idol depicts demons.

‘I presume that some journalists caught the word ‘demon’ in our publications, and took it out of the context,’ he said. ‘It actually has a very wide range of meanings even in English, from devil to good genius. Given the Idol was created 11,500 years ago, we can’t yet, or possibly ever, say just what it depicted. We don’t have enough context.’

‘These could have been some kind of spirits – not deities, because we think that deities appeared later.’

‘While we can’t be sure on what the Idol depicted, we mustn’t underestimate people who created it.

‘They had all the necessary tools and skills, plus a rather complex view of the world which to them was populated with spirits. Not only animals or trees, even stones were animated.

‘We think it was something close to animism’, Dr Zhilin said.

‘I see in these images unity and diversity of the world that surrounded the creators of the Idol, which clearly wasn’t divided into the kind and evil spirits.’

‘We are a long way from unravelling the ancient code left by the creators of the Shigir Idol. There is nothing in the world similar to the Idol, no written data left.

Comment: There are some other notable finds of great antiquity: Solving the Mystery of a 35,000-Year-Old Statue

‘There are interpretations that it could be something like a Totem pole, but it is only a suggsetion. It could have also been a hidden sacred place, yet there are not enough facts to support any of these suggestions.’

The Shigir Idol is on display at the Sverdlovsk Regional History Museum in Yekaterinburg. 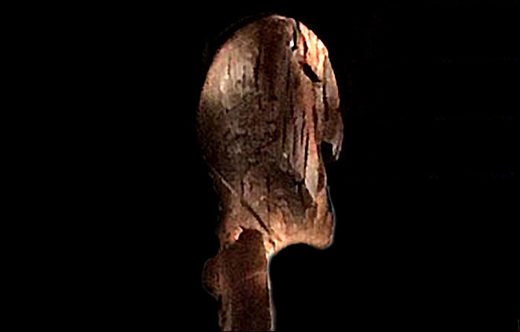 © Olga Gertcyk, The Siberian Times
The stunning idol is three times as old as the Egyptian pyramids. 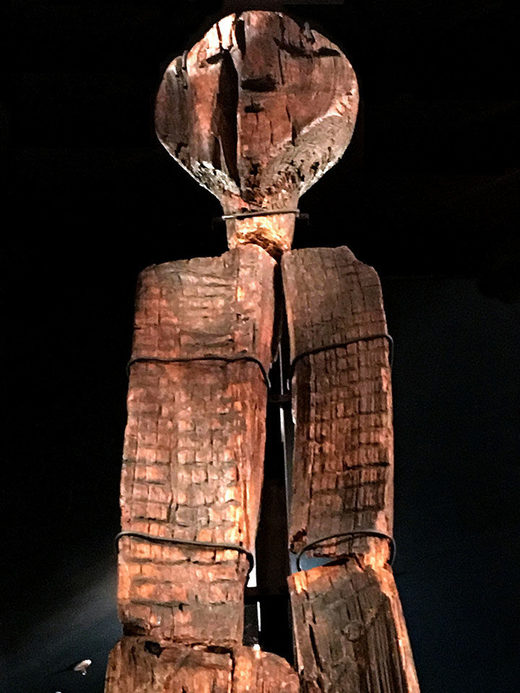 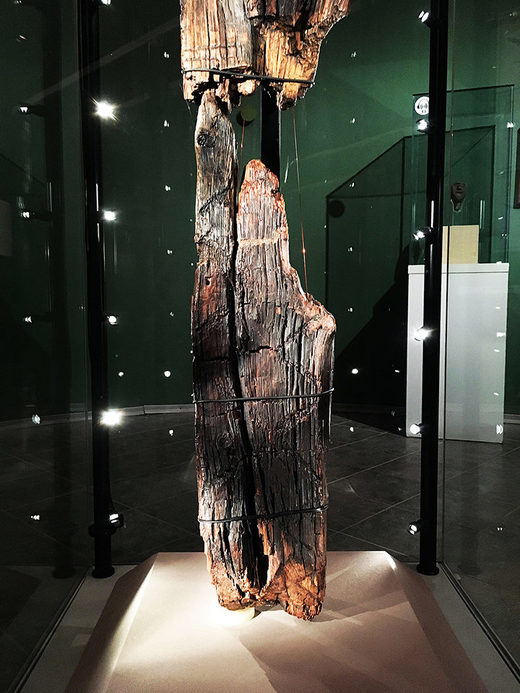 Shigir Idol in full
Comment: For more on the idol, and for some information about the intriguing history of the region in which it was found, see: