The Alien Agenda for Planet Earth – Petition For Your Review! 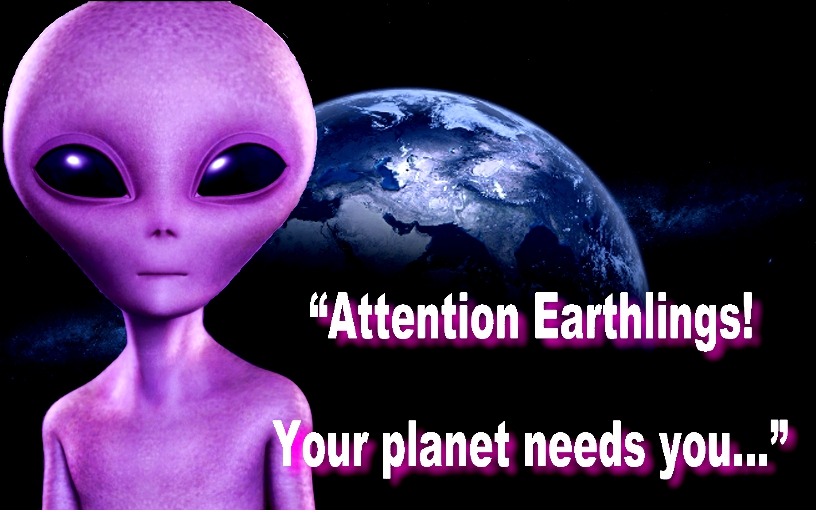 Aliens have an agenda for Planet Earth and the Human Race. This much we know. Exactly what that agenda might be is currently the subject of much heated debate among the UFO community. However, one thing that most can agree on, is that understanding the alien agenda is of paramount importance to us all. Because: why aliens are here; and what they have planned for us, are probably the biggest questions facing Mankind.

When it comes to the subject of UFOs, and alien visitation, we are told all manner of things: much of it contradictory, by all manner of people. We are presented with a bewildering array of theories and fantastic scenarios, life changing personal experiences and wondrous revelations telepathically channeled – via some human intermediary – by benevolent entities from across the Cosmos. Ufology, it would appear, is rapidly morphing into some kind of all-views-are-valid belief system. And the fact that organized religion now seems to be re-positioning itself to accommodate the acceptance: by mainstream science, that, ‘We are not alone’, only serves to underscore this growing trend.

Which is tragic beyond belief. Because – amidst all this clamour – the only voices that can be heard belong to us. Or, should I say, those of us that shout the loudest.

Now what we all, seriously, need to do here is to shut (the fu..) up for a moment and listen. Because there are other, quiet voices trying to make themselves heard above the relentless babble. These voices belong to logic, reason and the alien emissaries sent to Planet Earth by Extraterrestrial Civilizations. What is more, these voices deserve an attentive audience: because what they have to say has profound significance for us all.

So, ladies and gentlemen, your attention please. Let’s apply a little cold, hard logic to one of the questions that generates so much disagreement among the increasingly fractious UFO community: the Alien Agenda. Why are aliens here?

However – before we can understand the motivations that move aliens to do the things that they do – we first have to consider something of the nature of the reality that produced them. The bottom line here is that, to understand alien nature and behaviour, we first have to factor in the fundamental nature of space and time.

Einsteinian physics tells us that space and time are one, that they equate with the same thing: space-time. Ergo, the physical extent of the Universe: its size, is inextricably bound up with the length of its duration. Now some of us believe – and some of us know beyond any shadow of a doubt – that aliens are travelling millions of light years across the Cosmos to visit us here on Planet Earth. Therefore, we also have to accept that: in order for them to do this, they must have overcome the spatial dimensionality associated with space-time. But is this all there is to it? What about space-time’s equally integral temporal dimensionality? Do we leave this out of the equation altogether? Why would we do this? To preserve a cosy little world view that precludes the existence of extraterrestrial civilizations? No, we must delude ourselves no longer and accept, as a fact, something that has been staring us in the face for several decades. Aliens can travel through time.

And this, my friends, is why they are here. Time travel is entirely feasible. Aliens probably mastered it many millennia ago. The thing is, though, extraterrestrial civilizations are technology based – as is our civilization. Their technology might be light years ahead of what we possess – but we are still a technological race – and aliens fully understand that one day we will find a way to conquer both space and time.

(NB. That day may arrive a lot sooner than you think. Please download and read this pdf: Alien Technology Explained.

So why, I hear you ask, should the prospect of our acquisition of time travel technology so greatly disturb our visitors from across the Cosmos? What we need to bear in mind here is that they have: according to the evidence, been around a long time. They have been observing us for thousands of years. And they have witnessed the terrible things that we do to each other. They have seen our wars. They have seen our total disregard for the well-being of our fellow men. And they have watched as we let our own children starve to death. They have seen all this; so, quite rightly, they fear us.

Now, at the moment, we couldn’t threaten ET in any way shape or form. But what will happen once we acquire the technology that will allow us to tear apart the fabric of space-time? What will happen when we have the ability to jump backwards: to a point in ET’s distant past, when our technology would suddenly become more advanced than his? We would then be in a position to destroy him completely. Furthermore, we could visit such devastation on any alien race: regardless of how far ahead of us they are, right now, technologically. To aliens, we are the boogeyman man in their closet. Their potential nemesis. They have good reason to fear us.

At this point we need to broaden our perspective a little and ask another, pertinent question: how does the possession of time travel technology affect the relationships between the alien races that possess it? Let’s imagine an unlikely scenario: that will allow us to explore this question and, by applying a modicum of logic, arrive at a relevant answer. Let’s imagine what would ensue should two alien races decide to go to war with each other. This first thing we need to determine here is: would these antagonists attack each other in the here and now – in the present? Logic dictates that they wouldn’t. They would each exploit their ability to travel through time to try and gain an advantage over one another. And so the disaster would unfold. We would witness two alien races leap-frogging each other backwards through time in an attempt to gain sufficient advantage to totally annihilate one another. There are only two possible outcomes to this scenario. Either one wins and wipes out the other; which would then lead to the victor being attacked by an alliance of neutral alien races seeking to ensure that the aggressor cannot ever do the same to them. Or both protagonists manage to completely erase each other from the cosmological time-line altogether. Please note: there are no winners either way.

This is why they are here. And this is what they are trying to communicate to us.

What’s more, we have evidence that this is, indeed, the case. In the early hours of March 16, 1967, a UFO appeared over Malmstrom Air Force Base in Montana: USA, and completely disabled a flight of ten Minuteman intercontinental ballistic missiles carrying nuclear warheads. The main witness to this event was Captain Robert Salas USAF (ret.) who was: at the time of the incident, the deputy combat missile crew commander in charge of the affected weapon systems. He, and other reliable witnesses, also report that ten more missiles: at another facility, were also taken down by a UFO that same night. 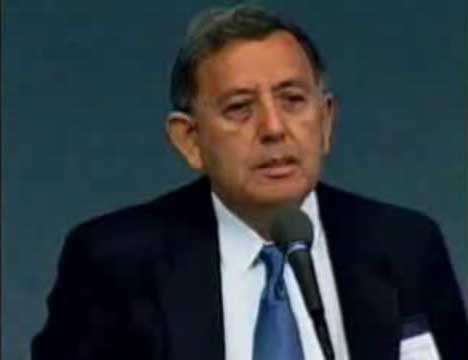 Then we have the Ariel Elementary School encounter. This took place at Ruwa: in Zimbabwe, on September 16, 1994. Here we have no fewer than sixty two witnesses: all of them children between the ages of five and eleven, that attended the school. They all tell the same: remarkably consistent, story. During a break in lessons: when they were all outside playing in the sunshine, a flying saucer landed beside the play area and two small aliens – with huge almond shaped eyes – emerged from the craft. These extraterrestrial visitors then communicated a terrible message to the youngsters. They implanted a terrifying vision: of a future world consumed by fire, directly into their young minds. (All the children describe the aliens communicating, ‘With their eyes.’) This telepathically implanted message appeared to warn of an impending nuclear holocaust. I say impending because I am supposing that the warning described events that will unfold within the lifetimes’ of these children. And the oldest of them will now be in their early thirties. (So, yes folks, we are running out of time.) 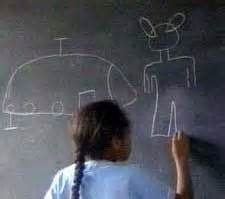 Child witness to an alien encounter
Now let’s just pause for a moment here and evaluate what we have so far. Aliens have achieved a level of technological advancement: that includes the mastery of time travel, which precludes them from ever going to war with one another. Aliens also appreciate that the human race will, one day, attain this same level of advancement and could – if we don’t radically change our belligerent behaviour in the meanwhile – constitute a very real threat to extraterrestrial civilizations in the future. Furthermore, they have: on numerous occasions, clearly demonstrated their ability to directly interfere with our nuclear weapons technology. And – on top of all this – they have already sent us a direct message describing what will befall mankind should we ever be foolish enough to use our nuclear weapons technology.

The pattern is there for us all to see. And the thread that runs right through this pattern can be summed-up in a single phrase: Peace is the Universal Imperative. This is the message. This is why aliens are here. They need us to adopt Universal Peace – not just as an expedient political policy – but as a basic tenet that underpins our very existence. We have to truly want it. And, above all else, we have to tell our extraterrestrial visitors that we want it.

Here’s what you need to do:

Please go to MoveOn.org and sign The Universal Peace Petition.

Please use this link: The Universal Peace Petition. 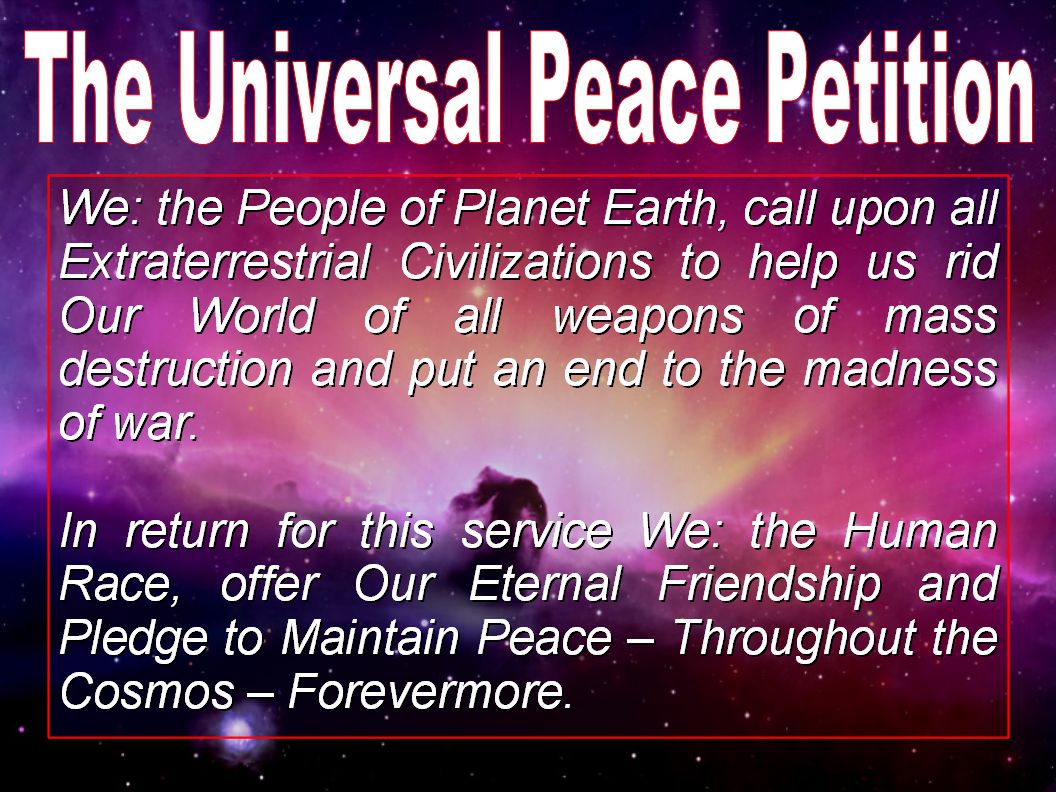 This is what you will be signing.
At this point, I’m sure, there’ll be quite a few of you asking: ‘What good is a petition going to do? Would aliens even be aware of it?’ Well it is an on-line petition. And we know our governments and intelligence agencies are monitoring where we go, what we do and what we say on-line. So why not ET? Where is there a better place to find out what we are thinking: with regard to the extraterrestrial visitation issue, than out there in cyberspace?

You should, as well, try and imagine the social impact that this petition could have if millions of people supported it. Imagine millions of people – from all over the world – demanding peace and actively seeking extraterrestrial intervention: for aliens to intercede and divest us of our insane nuclear, biological and chemical weapon systems. Wouldn’t such developments be newsworthy? Wouldn’t they become the hottest topic of conversation across the media, society and the internet?

My friends, this petition could deliver very real results. It does need enormous support: and millions of signatures, before it can achieve those results but, if enough people put in enough effort, we can get there.

You should also understand that – by supporting this petition – you are also actively promoting mutually beneficial contact between the Human Race and Extraterrestrial Civilizations.

So who is up for the challenge ahead? Are you?

If you are, then your collaboration: with the Alien Agenda for Planet Earth, begins here. 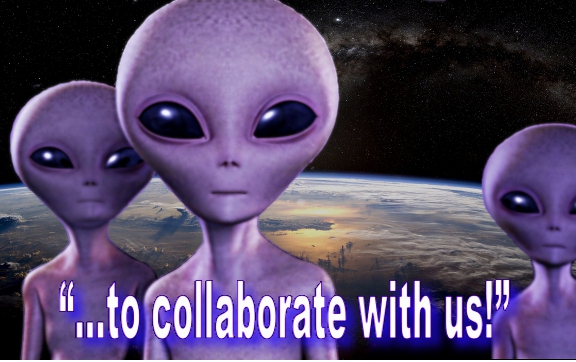 This article is available for download in pdf format.

Here’s the link: The Alien Agenda for Planet Earth.

By doing this you could well be making a serious contribution to the future health of our planet and all life upon it.

Be the change you want to see.

Many thanks for reading.