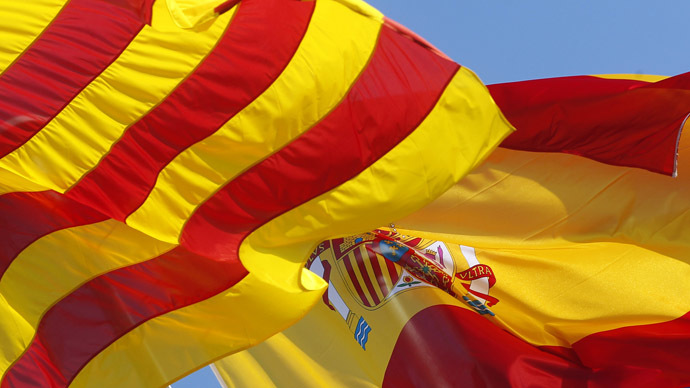 The Catalan government has given up plans to hold a November 9 referendum on independence from Spain, a regional party leader told AFP.

Catalan President Artur Mas announced the cancellation of the November 9 referendum at a meeting between the parties seeking Catalonia’s independence and the regional government. The cancellation is because of a lack of legal guarantees, El Pais newspaper reported. Instead, the government will hold a public participation process ‒ a series of town hall meetings and debates ‒ on the political future of the province.

“The (regional) government has determined that the consultation can’t take place,” Joan Herrera of the Initiative for Catalonia, a political party in the province, told reporters following the meeting.

In the meantime, while the participatory process is finalized, the pro-independence groups will seek to get the most out of the provincial laws on consulting the Catalan people, which the Constitutional Court failed to suspend when it originally blocked the non-binding vote at the end of September.

The Catalan leaders temporarily suspended its promotion of the independence referendum on September 30, one day after the court’s decision. The regional government halted the campaign to avoid subjecting public servants to possible legal liability for defying the court, the Wall Street Journal reported at the time.

According to the Catalan government and Minister for the Presidency, Francesc Homs, the provincial leaders were to consider some preparations for the vote from October 13-15. He added that “there is no deadline” to decide if the vote will take place.

Before the vote can be held, Catalonia must publish the location of voting stations and the entire list of eligible voters, AFP reported.

“Catalonia is determined to channel its concerns through legal and peaceful means … We will achieve this on Nov 9, or we will achieve it on a later date,” Felip Puig, who is in charge of business and labour for the Catalan government, told journalists in Barcelona.

“I will sign the decree for the consultation in Catalonia, in fact I will call this consultation for November 9 as agreed some months ago with the majority of Catalan political forces,” Mas said.

Located in the northeast of Spain, Catalonia is a prosperous region and an industrial center, with its economy accounting for one-fifth of Spain’s economy. It has its own language, a rich culture and a history of rebellions against the Spanish Crown.

In 2014, Catalonia and its push for sovereignty has been frequently compared with Scotland, which voted ‘No’ in last month’s referendum, destroying the hopes of creating a precedent for other regions longing for independence. The reasons for the comparison have been economic. However, Scotland had an official agreement with London to conduct the referendum, while it remains a hot-button issue for Madrid.