ET’s or Advanced Military ARV? | MoD Scientist Is Latest Whistleblower After Bizarre ‘Encounter With THIS UFO’

Here is another example of mainstream soft disclosure dripping out into the public, this time, courtesy of the UK news outlet the Express. 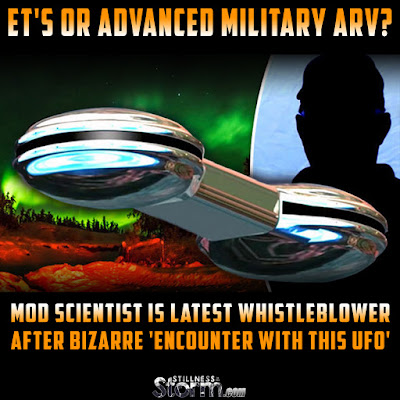 by Justin Deschamps, Stillness In The Storm sitsshow.blogspot.com
Is the UFO spotted extraterrestrial in origin or part of the lower level secret space programs?

According to the anonymous whistleblower in the cited in the below article:

He believes it could just as easily be a top-secret technology created by government departments on Earth.

He is calling for anyone who has seen a similar craft, or any advanced scientists with knowledge of high frequency radio frequency field generation systems. (emphasis added)

The craft spotted could have been an advanced ARV or alien reproduction vehicle, like what is depicted in the latest season of The X-files.

The partial disclosure agenda of the Earth-based alliance groups and their lower level space program allies seems to be rolling out as stated by the secret space program whistleblower and insider Corey Goode.

Related Corey Goode on: Disclosure, Mass Arrests Rumor: Pope Francis signed off on what is being called a binding “Galactic Agreement” this past Sunday

The whole truth about extraterrestrials, the secret space program and the epic history of our solar system is much more replete than what has been leaked to the public thus far.

Full disclosure is the only option! Accept nothing less.

PS – I couldn’t help but think of the 1980’s film Flight of the Navigator when reading the descriptions of the UFO that looked like it was “forged out of mercury.”