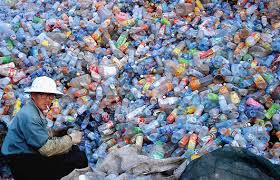 I’m so pleased to see people taking a stand to protect their health and the environment. These initiatives are proliferating and getting attention, but most importantly—RESULTS!  Setting the precedent is the hardest part. After that it’s easy for others to follow the blueprint and expect success.

In this case, the vote was unopposed!

Hopefully through this process the public will come to realize that it’s not only about the incredible amount of waste produced by the bottles that is a threat, but the plastic breaking down is dangerous to our bodies and the ecosystem, AND the so-called “pure” water sold in many of these bottles is anything but pure, and just over-priced, glorified, designer tap water. It’s time to get smart. ~ BP

San Francisco on Tuesday became the first major city in the U.S. to ban the sale of plastic water bottles on public property, building on a nationwide effort to curb waste from the billion-dollar industry.

The nine-months-in-the-making proposal by Board of Supervisors President David Chiu navigated a number of challenging issues, from The City’s drinking-water infrastructure to impacts on events such as the Folsom Street Fair or lower-key nonprofit events that often rely on the sale of bottled water for
revenue.

Even as the American Beverage Association opposed the restrictions, staunch environmentalists were calling for a tougher crackdown.

During the next four years, the ban will phase out the sales of plastic water bottles holding 21 ounces or less on city property, indoor or outdoor, which will impact park vendors, food truck operators, street fairs and places like the Moscone Center convention facility. Waivers are permissible if an adequate alternative water source is not available.

“It was not long ago that our world wasn’t addicted to plastic water bottles,” Chiu said. “It wasn’t until the 1990s that the now-$60 billion plastic-bottle water industry experienced an enormous growth based on massive marketing and distribution campaigns.”

The proposal was supported by the Think Outside the Bottle campaign, a nationwide effort that encourages restrictions of the “eco-unfriendly product.”

San Francisco’s ban is less strict than the full prohibitions passed in 14 national parks, a number of universities and Concord, Mass.

“This is legislation that takes a much more targeted approach to reducing plastic-bottle waste,” Chiu said.

Joshua Arce, chairman of the Commission on the Environment, said the ban is “another step forward on our zero-waste goal.” The City wants to have no waste going to its landfill by 2020. Its diversion rate now stands at 80 percent.

Past efforts toward the goal included banning plastic bags and plastic-foam containers.

“We had big public events for decades without plastic bottles and we’ll do fine without them again,” Arce said.

The American Beverage Association, which includes Coca-Cola Co. and PepsiCo, said in a statement that the ban was “nothing more than a solution in search of a problem. This is a misguided attempt by city supervisors to decrease waste in a city of avid recyclers.”

“If we can do this on public property and folks understand that this is absolutely doable, then we can look at next steps,” he said.

The Board of Supervisors voted 11-0 to approve the legislation Tuesday.