Sumerian text records that with the arrival of the Sons of Annu in the Valley between the two rivers, the very first object that was brought with them were two or more tablets of a shiny bronze like appearance that held immense power and knowledge. These tablets were fought over, lost, hidden, and stolen many times through-out the early history of mankind. The knowledge that they held was often turned to in times where the fate of the Sons of Annu was to be determined.

From the earliest of recorded text the Tablets of Destiny, were involved in the wars and conflicts of the Annu. With the possession of the Tablets of Destiny your military prowess was increased, and this fact often brought victory to the holder. The first recorded text involves the Creation Account which tells of a Great God Kingu who possessed the tablets to enhance his chances for victory. He received these tablets from the ancient goddess Tiamat. His wife.Tiamat was the original owner of the tablets, and by giving these tablets to Kingu, it would allow him to defeat the other Great Gods. This did not occur. Kingu was later defeated, and the tablets were turned over to the Great God who defeated him. In Babylon text this Great God is Marduk.

Later texts also speak of a God named “Zu” which is probably not his real name, but this God steals the tablets from Enlil, the true owner, and what results is one of the most well known Sumerian texts. Zu is finally defeated, after a long and protracted battle, and again the tablets are the centre of the war. Even Ishtar makes an attempt to steal the tablets, but when negotiation fails, overt action is needed to return the tablets to Enki, who happened to be the owner at that time.

The tablets though were not from the valley of Sumer, and may not have originated from earth, but they have always been apart of the earth and mankind. What do they look like? In the Sumerin creation tablets it clearly speaks of the Tablets being given to Kingu by Tiamat, and “fastened it to his breast”. Then after the fearsome battle with Marduk, “Marduk took the tablets of Destiny…and sealed it and place it on his breast”. So the Tablets of Destiny are on the breast of Marduk. 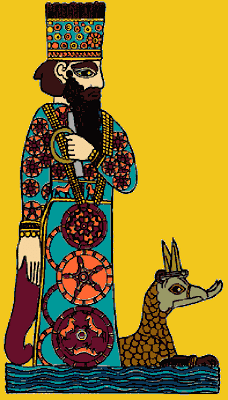 The Egyptians in their mythology also had a similar tablet of great wisdom and power. This was known as the Book of Toth. Toth was the Egyptian God of Wisdom and as Egyptian text states he wrote in this book, all the magic of the world.

“Toth wrote the Book with his own hand, and in it is all the magic in the world. If thou readest the first page, thou wilt enchant the sky, the earth, the abyss, the mountains, and the sea; thou wilt understand the language of the birds of the air, and thou wilt know what the creeping things of earth are saying, and thou wilt see the fishes from the darkest depths of the sea. And if thou readest the other page, even though thou wert dead and in the world of ghosts, thou couldest come back to earth in the form thou once hadst. And besides this, thou wilt see the sun shining in the sky with the full moon and the stars, and thou wilt behold the great shapes of the gods.”