The Forever War Is So Normalized That Opposing It Is “Isolationism”

The Forever War Is So Normalized That Opposing It Is “Isolationism”

Authored by Caitlin Johnstone via Medium.com,

After getting curb stomped on the debate stage by Tulsi Gabbard, the campaign for Tim “Who the fuck is Tim Ryan?” Ryan posted a statementdecrying the Hawaii congresswoman’s desire to end a pointless 18-year military occupation as “isolationism”.

“While making a point as to why America can’t cede its international leadership and retreat from around the world, Tim was interrupted by Rep. Tulsi Gabbard,” the statement reads.

“When he tried to answer her, she contorted a factual point Tim was making — about the Taliban being complicit in the 9/11 attacks by providing training, bases and refuge for Al Qaeda and its leaders. The characterization that Tim Ryan doesn’t know who is responsible for the attacks on 9/11 is simply unfair reporting. Further, we continue to reject Gabbard’s isolationism and her misguided beliefs on foreign policy. We refuse to be lectured by someone who thinks it’s ok to dine with murderous dictators like Syria’s Bashar Al-Assad who used chemical weapons on his own people.”

Ryan’s campaign is lying. During an exchange that was explicitly about the Taliban in Afghanistan, Ryan plainly said “When we weren’t in there, they started flying planes into our buildings.” At best, Ryan can argue that when he said “they” he had suddenly shifted from talking about the Taliban to talking about Al Qaeda without bothering to say so, in which case he obviously can’t legitimately claim that Gabbard “contorted” anything he had said. At worst, he was simply unaware at the time of the very clear distinction between the Afghan military and political body called the Taliban and the multinational extremist organization called Al Qaeda. 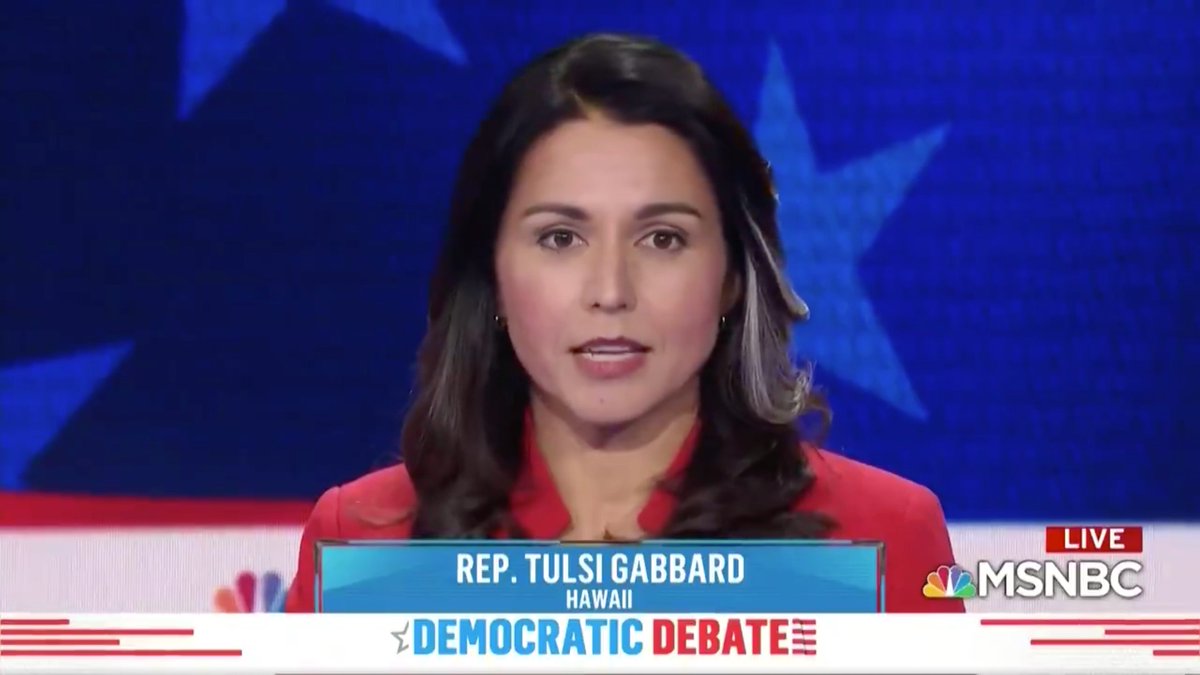 Watch the 5 minutes that have people talking Tulsi!
A soldier’s truth about the establishment war machine driving US foreign policy http://tulsi.to/trumps-chickenhawk-cabinet … #DemDebate – #TULSI2020

More importantly, Ryan’s campaign using the word “isolationism” to describe the simple common sense impulse to withdraw from a costly, deadly military occupation which isn’t accomplishing anything highlights an increasingly common tactic of tarring anything other than endless military expansionism as strange and aberrant instead of normal and good. Under our current Orwellian doublespeak paradigm where forever war is the new normal, the opposite of war is no longer peace, but isolationism. This removal of a desirable opposite of war from the establishment-authorised lexicon causes war to always be the desirable option.

This is entirely by design. This bit of word magic has been employed for a long time to tar any idea which deviates from the neoconservative agenda of total global unipolarity via violent imperialism as something freakish and dangerous. In his farewell address to the nation, war criminal George W Bush said the following:

“In the face of threats from abroad, it can be tempting to seek comfort by turning inward. But we must reject isolationism and its companion, protectionism. Retreating behind our borders would only invite danger. In the 21st century, security and prosperity at home depend on the expansion of liberty abroad. If America does not lead the cause of freedom, that cause will not be led.”

A few months after Bush’s address, Antiwar’s Rich Rubino wrote an article titled “Non-Interventionism is Not Isolationism”, explaining the difference between a nation which withdraws entirely from the world and a nation which simply resists the temptation to use military aggression except in self defense.

“Isolationism dictates that a country should have no relations with the rest of the world,” Rubino explained. “In its purest form this would mean that ambassadors would not be shared with other nations, communications with foreign governments would be mainly perfunctory, and commercial relations would be non-existent.”

“A non-interventionist believes that the U.S. should not intercede in conflicts between other nations or conflicts within nations,” wrote Rubino. “In recent history, non-interventionists have proved prophetic in warning of the dangers of the U.S. entangling itself in alliances. The U.S. has suffered deleterious effects and effectuated enmity among other governments, citizenries, and non-state actors as a result of its overseas interventions. The U.S. interventions in both Iran and Iraq have led to cataclysmic consequences.” 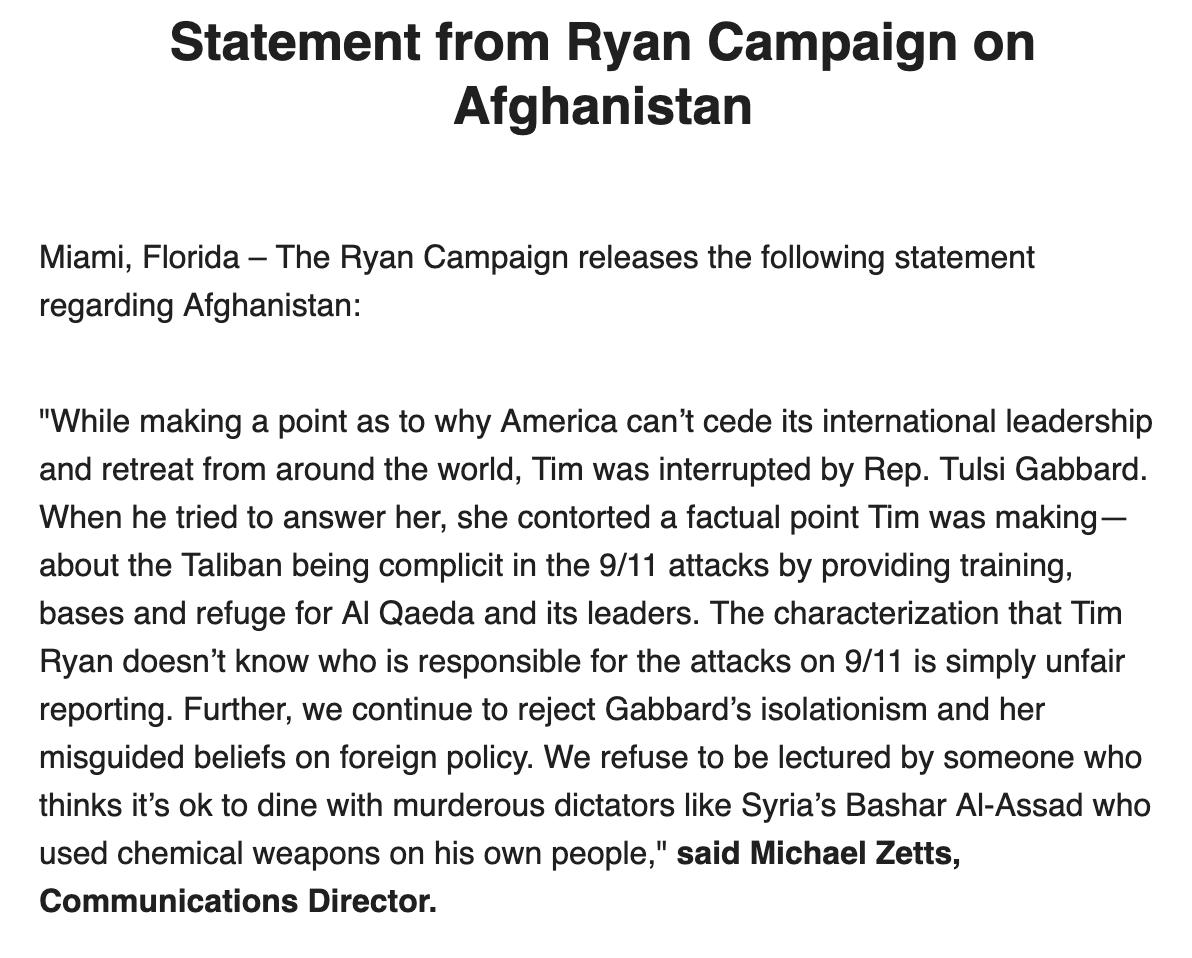 Statement from Ryan Campaign on Afghanistan

Calling an aversion to endless military violence “isolationism” is the same as calling an aversion to mugging people “agoraphobia”. Yet you’ll see this ridiculous label applied to both Gabbard and Trump, neither of whom are isolationists by any stretch of the imagination, or even proper non-interventionists. Gabbard supports most US military alliances and continues to voice full support for the bogus “war on terror” implemented by the Bush administration which serves no purpose other than to facilitate endless military expansionism; Trump is openly pushing regime change interventionism in both Venezuela and Iran while declining to make good on his promises to withdraw the US military from Syria and Afghanistan.

Another dishonest label you’ll get thrown at you when debating the forever war is “pacifism”. “Some wars are bad, but I’m not a pacifist; sometimes war is necessary,” supporters of a given interventionist military action will tell you. They’ll say this while defending Trump’s potentially catastrophic Iran warmongering or promoting a moronic regime change invasion of Syria, or defending disastrous US military interventions in the past like Iraq.

This is bullshit for a couple of reasons. Firstly, virtually no one is a pure pacifist who opposes war under any and all possible circumstances; anyone who claims that they can’t imagine any possible scenario in which they’d support using some kind of coordinated violence either hasn’t imagined very hard or is fooling themselves. If your loved ones were going to be raped, tortured and killed by hostile forces unless an opposing group took up arms to defend them, for example, you would support that. Hell, you would probably join in. Secondly, equating opposition to US-led regime change interventionism, which is literally always disastrous and literally never helpful, is not even a tiny bit remotely like opposing all war under any possible circumstance.

Another common distortion you’ll see is the specious argument that a given opponent of US interventionism “isn’t anti-war” because they don’t oppose all war under any and all circumstances. This tweet by The Intercept’s Mehdi Hasan is a perfect example, claiming that Gabbard is not anti-war because she supports Syria’s sovereign right to defend itself with the help of its allies from the violent extremist factions which overran the country with western backing. Again, virtually no one is opposed to all war under any and all circumstances; if a coalition of foreign governments had helped flood Hasan’s own country of Britain with extremist militias who’d been murdering their way across the UK with the ultimate goal of toppling London, both Tulsi Gabbard and Hasan would support fighting back against those militias.

The label “anti-war” can for these reasons be a little misleading. The term anti-interventionist or non-interventionist comes closest to describing the value system of most people who oppose the warmongering of the western empire, because they understand that calls for military interventionism which go mainstream in today’s environment are almost universally based on imperialist agendas grabbing at power, profit, and global hegemony. The label “isolationist” comes nowhere close.

It all comes down to sovereignty. An anti-interventionist believes that a country has the right to defend itself, but it doesn’t have the right to conquer, capture, infiltrate or overthrow other nations whether covertly or overtly. At the “end” of colonialism we all agreed we were done with that, except that the nationless manipulators have found far trickier ways to seize a country’s will and resources without actually planting a flag there. We need to get clearer on these distinctions and get louder about defending them as the only sane, coherent way to run foreign policy.