The Origins of ‘Spygate’: 10 Questions

The Origins of ‘Spygate’: 10 Questions

Simultaneously, it was reported that Barr is working with the directors of the CIA, the FBI, and the Office of the Director of National Intelligence (ODNI) to review the intelligence-gathering techniques used to investigate President Donald Trump’s 2016 campaign.

The announcements are significant given the amount of information already known, much of which points to irregularities in the investigations and a severe bias.

Take, for example, text messages sent between FBI agent Peter Strzok and FBI lawyer Lisa Page—both of whom were working on the counterintelligence investigation into the Trump campaign—in which Page asked Strzok: “He’s not ever going to become president, right? Right?!”

Here are 10 key questions that remain to be answered in the scandal that has become known as “Spygate”: 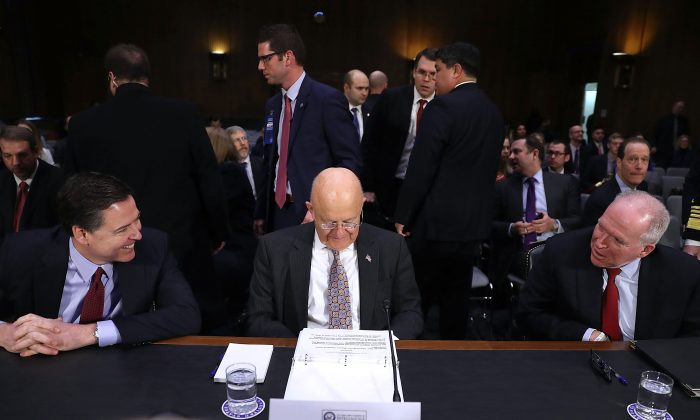 1. What were the roles of the CIA and Brennan’s ‘Interagency Task Force’?

Former CIA Director John Brennan has admitted in testimony before Congress and in media interviews that he passed intelligence received from the UK on the Trump campaign to the FBI with the intention of having the bureau investigate it.

“I made sure that anything that was involving U.S. persons, including anything involving the individuals involved in the Trump campaign, was shared with the [FBI],” Brennan said during a May 23, 2017, congressional testimony.

“It served as the basis for the FBI investigation to determine whether such collusion [or] cooperation occurred.”

Notably, Brennan met with Robert Hannigan, the head of UK spy agency GCHQ, in Washington in the summer of 2016. The meeting was unusual, since Hannigan’s equivalent in the United States would have been National Security Agency (NSA) Director Adm. Mike Rogers.

Also in the summer of 2016, Brennan set up a joint task force that included, according to reporting by the BBC, six agencies or government departments: the CIA, the FBI, the Treasury Department, the Justice Department (DOJ), the ODNI, and the NSA.

2. How exactly did the FBI use the ‘Steele dossier’?

The dossier produced by former British MI6 official Christopher Steele played a key role in the FBI’s investigation of the Trump campaign, as well as the creation of the public perception that Trump colluded with Russia. None of the key 103 allegations contained in the Steele dossier were confirmed in the investigation by special counsel Robert Mueller.

Fusion GPS co-founder Glenn Simpson, alongside Steele, actively pushed the false allegations contained in the dossier through the FBI, the DOJ, the State Department, and the media.

The FBI had used Steele as a paid official source until it severed relations with him over his unauthorized contact with the media.

How exactly did the FBI use the Steele dossier in its counterintelligence investigation, and at what point did the bureau know that the information contained in it was false?

3. What was Obama’s role in the Trump investigations?

It’s unclear how much former President Barack Obama was involved in the investigations of the Trump campaign. Given the involvement of the directors of the CIA and FBI in the highly sensitive investigations of a presidential candidate, it’s unlikely he wasn’t aware.

In a Jan. 20, 2017, email written by Obama’s national security adviser Susan Rice to herself—marked “TOP SECRET”—she memorialized a meeting that took place in the Oval Office earlier that month. In the now partially declassified email, Rice wrote that those present included Obama, Vice President Joe Biden, FBI Director Comey, and Deputy Attorney General Sally Yates. During the meeting, Obama allegedly told the attendees that when it came to the Russia investigation, he was committed to ensuring “this issue [was] handled by the Intelligence and law enforcement communities ‘by the book.’”

We also know that in January 2017, Obama received a briefing by Brennan, Comey, and DNI James Clapper in which he was given a summary of the Steele dossier, which was attached to an intelligence report.

Trump recently hinted in an interview with Fox News’ Sean Hannity that Obama was aware:

“It is inconceivable when it goes to Clapper, Brennan, Comey, these people, I would imagine that some other people, maybe a little bit higher up also knew about it, and maybe a lot higher up,” Trump said.

4. What happened with the information obtained through spying on the Trump campaign?

We know that the Trump campaign was spied on in at least five different ways.

Unmasking: Under Obama, national security adviser Susan Rice, former U.S. Ambassador to the U.N. Samantha Power, and CIA Director John Brennan made hundreds of so-called unmasking requests for the identities of members of the Trump campaign in intelligence reports. Identities of Americans are, by default, redacted in foreign communications intercepted by the NSA.

Undercover Informants: We know that the FBI used at least two undercover informants to spy on the Trump campaign. One of the informants was Stefan Halper, who contacted Trump campaign associates Carter Page and George Papadopoulos. The other is known as Azra Turk (her real name remains unknown), who, according to reporting by The New York Times, was sent to London in September 2016 to try to get information from Papadopoulos.

National Security Letters: These documents, which allow the FBI to secretly subpoena records, were used to target the Trump campaign, according to reporting by The New York Times.

Foreign Intelligence: British intelligence agency GCHQ provided officials within the CIA with information on the Trump campaign as early as late 2015, according to reporting by The Guardian.

The question remains, what was the surveillance information used for, and with whom was it shared? Was any of the information shared for political purposes? And was any of it shared with Hillary Clinton’s campaign or the DNC?

5. Did Obama officials and the DNC collude with Ukraine?

Obama administration officials from the National Security Council, the FBI, the DOJ, and the State Department met with Ukrainian corruption prosecutors in Washington in January 2016.

During the meeting, the officials, according to reporting by The Hill, asked the Ukrainians to reopen a closed investigation into payments made to U.S. figures by Ukraine’s Russia-backed Party of Regions.

Seven months later, Ukrainian Member of Parliament Serhiy Leshchenko would publicly reveal alleged payments contained in a Party of Regions ledger to Trump campaign manager Paul Manafort, leading him to be removed from the campaign.

According to Politico, Ukrainian-American Alexandra Chalupa told a senior DNC official in January 2016 that “we can expect Paul Manafort to be involved in this election.” This was prior to Manafort even reaching out to the Trump campaign through a mutual acquaintance, on Feb. 29, 2016.

Chalupa, who worked as a consultant for the DNC, was working closely with the Ukrainian Embassy to obtain information on Trump, accordingto former embassy staffer Andrii Telizhenko.

Why was a DNC consultant trying to get help from a foreign government to obtain dirt on the Trump campaign? And why were Obama officials pushing Ukrainian prosecutors to reopen an investigation into Manafort?

6. Was the FBI’s team to investigate Trump hand-picked, and why?

Several of the key investigators of the FBI’s counterintelligence investigation into Trump were the same as those investigating Hillary Clinton’s use of a private email server to send classified information.

Notably, FBI Deputy Director Andrew McCabe, FBI agent Peter Strzok, and FBI lawyer Lisa Page (who at the time was a special counsel to McCabe) were involved in both investigations.

McCabe had been promoted on July 30, 2015, to the No. 3 position within the FBI, as associate deputy director, and was moved to FBI headquarters from the Washington Field Office.

Around two months after the FBI’s investigation of Clinton was opened, Strzok was one of several hand-picked agents sent over from the Washington Field Office and moved to headquarters to help with the investigation.

Strzok’s direct supervisor during the Trump investigation, then-Assistant Director of the FBI’s Counterintelligence Division Bill Priestap, acknowledged to congressional investigators in closed-door testimony in June 2018 that it was Strzok and FBI analyst Jonathan Moffa who were “driving the train.”

Priestap was unaware of the meeting Strzok had with McCabe and Page that was described in the “insurance policy” text message.

This raises the question of whether the agents who worked on the Trump campaign investigation were hand-picked for the job, and why the regular lines of reporting were broken during the investigation.

7. What was Comey’s role in the investigation of the Trump campaign?

Former FBI Director James Comey, since leaving the bureau, has made multiple public statements about his involvement in the investigation of the Trump campaign. In a recent CNN town hall interview, he said that he was “briefed on it on a regular basis” and that “they kept me closely informed.”

Significant questions remain, however, about how the investigation into the Trump campaign was opened, as well as about Comey’s interactions with Brennan, and whether the spying and infiltration efforts approved by Comey were done so on a legitimate basis.

8. What was Lynch’s involvement?

Very little is known about former Attorney General Loretta Lynch’s involvement in the investigation of the Trump campaign. As FBI director, Comey reported directly to Lynch.

The DOJ under Lynch defended the Carter Page FISA application before the FISA court, on behalf of the FBI.

Fusion GPS has made payments to journalists who reported on topics related to alleged Russian interference in the elections, court documents show. Documents filed in the District of Columbia in 2017 by Scott Glabe, who was then the deputy general counsel for the House Permanent Select Committee on Intelligence, showed that at least three journalists received payments from the company.

The journalists in question have “reported or written on matters within the scope of the committee’s investigation,” the court documents show.
Fusion GPS has denied that the company paid journalists for their reporting.

“They are not permitted to publish any articles based on that work, nor do we pay journalists to write stories,” Fusion GPS’s counsel, Joshua Levy, told The Epoch Times in a statement in November 2017.

Instead, Levy said, the company sometimes works “with contractors that have specialized skills seeking public records under open-records laws.”

10. What changes will be brought to the FBI?

As investigations into the conduct of officials conclude, a prudent question will remain: What reforms are needed at the FBI, and other agencies, to ensure that a politicized investigation of a political candidate and his or her campaign never happens again?