This is the fantasy: we can rebuild our entire global industrial society every generation or two forever.

“Earthrise” is one of the most influential photographs ever published. Taken on the Apollo 8 mission in late December 1968 by astronaut Bill Anders, it captures Earth’s uniqueness, isolation and modest scale: a blue and white dot on a vast sea of lifeless darkness. 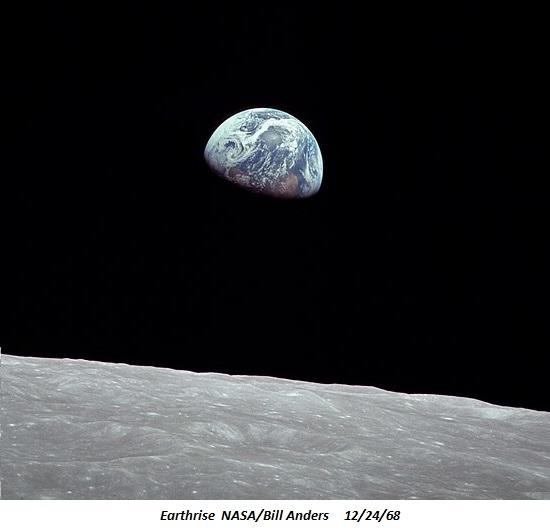 The revelation that strikes me is the insanity of pursuing eternal economic growth, not as an option but as the only possible path: there is literally no alternative to extracting ever greater quantities of the planet’s resources to enable ever greater consumption by the planet’s 7.7 billion humans.

Stripped to its essence, this mad drive is about profit and power. The necessity is sold as the only path to prosperity for humanity, but it’s really about securing wealth and power for the few.

A recent article in Scientific American magazine highlights how the idealistic impulses of protecting the planet’s diverse life from the machinery of “growth” are inevitably subsumed by the necessity for profit: The Ecologists and the Mine.

Here’s what these kinds of articles never say: markets cannot price in the value of non-monetized natural assets such as diverse ecosystems. Whatever cannot be monetized right now is worthless, as markets lack any mechanism to price in what cannot be valued by market supply and demand in the moment.

There is no way to fix this fatal flaw in markets, and attempts to do so are merely excuses deployed to enable the profitable exploitation and resulting ruin.

(Recall that neoliberalism is the quasi-religious ideology of turning everything on Earth into a market, so it can be exploited and financialized by the few at the expense of the many.)

As for renewable energy: as my colleague Nate Hagens has observed, renewables are more properly called “rebuildables,” as solar panels, windmills, etc. don’t last forever but must be replaced every 20 years or so. Yes, dams last a long time, but solar panels, wind turbines, and all the other forms of “renewable” energy must be periodically replaced at enormous expense.

And where do the resources and energy come from to replace the immense base of “renewable” energy installations? From oil/natural gas and vast pit-mines.

As Chris Martenson noted in a recent conversation with me (paraphrasing his comment), “I’ll be impressed with renewable installations when they can power the fabrication of their replacements.”

This is the inconvenient reality few want to discuss publicly: none of the renewable energy sources is remotely capable of generating enough energy to smelt and mold industrial metals at scale, fabricate silicon wafers and so on.

The “eternal growth” model has dominated all political-economic ideologies for hundreds of years. When humanity first industrialized the planet, there were fewer than 1 billion humans. Now 7.7 billion humans all want the resource/energy intensive lifestyle of the developed-world middle class.

There is no way our planet has enough resources to provide all the goodies for 8 to 10 billion humans. We can’t even provide clean fresh water to 8 billion people, much less Roombas, electric vehicles, refrigerated medications, frozen spring rolls, door-to-door delivery of the latest gizmo and cheap flights to every corner of the globe.

The technological fantasy is that new efficiencies will magically make eternal growth possible. But all these fantasies overlook 1) that markets cause the destruction of everything that isn’t being monetized for profit in the moment; 2) that “renewable” energy all depends on cheap hydrocarbons in essentially limitless quantities and 3) that replacing everything every generation creates what my colleague Bart D. calls The Landfill Economy.

In other words, the tech “solution” to 500 million internal combustion engine (ICE) vehicles is to toss those 500 million vehicles in the landfill (recycling is a nice idea but not always financially practical) and then go mine the immense amounts of metals, minerals and hydrocarbons needed to built 500 million all-electric vehicles.

Then, in a generation, repeat the process, as “more efficient” vehicles are developed.

This is the fantasy: we can rebuild our entire global industrial society every generation or two forever, and fuel the entire process of replacement with hydrocarbons, essentially forever, and pay for it all with more debt.

The impossibility of this vision–a tech-enabled Landfill Economy that tells itself it’s “efficient” and “sustainable” because the full costs are never calculated, indeed, cannot be calculated in a market economy–is what drives me to keep working on an alternative socio-political-economic system, CLIME: the community-labor-integrated-money economy: A Radically Beneficial World: Automation, Technology and Creating Jobs for All.

One glance at Earthrise informs us that the only sustainable path is DeGrowth: squandering far fewer resources on consumerist waste, a path that will spell the end of the current Landfill Economy of profit-driven eternal growth, and the entire financialization structure built on the Landfill Model that enriches the few at the expense of the many.

“Renewables/rebuildables” are a tiny sliver of global electrical generation, just enough to power the marketing of consumerist junk headed for the landfill.

Here’s the energy production of the World’s Workshop, i.e. China: “renewables/rebuildables” are a tiny sliver.