The REAL Occult Reason Behind The April 2018 Syria Missile Attacks

Many people – especially Trump apologists or rabid followers of “QAnon” are doing mental gymnastics trying to explain the rationale for the missile attacks which occurred during the pre-dawn hours of April 14, 2018 on Syrian targets.

While there are many layers of maneuvers and deceptions occurring, if one views the lens of this attack via the eyes of a ‘non-human parasitic intelligence’ (NHPI) which is hell-bent on maintaining the psychological & energetic prison of humanity – then the motives become crystal clear.

But are people actually willing to consider this explanation? Few will do so, I fear. I expect to be ridiculed by those who are far more expert than I in the following the news of the alternative media.

Most alternative media websites gain popularity based upon fear.  Fear is the ‘primary food source’ of the NHPI – also known as “archons” for those who are familiar with Gnosticism. The true non-physical control structure is far too complex to be easily summarized here, but there is one negative faction whose primary goal since the Council of Nicea is to keep humanity in a state of fear and ignorance:

The Society of Jesus – aka “The Jesuits”

Although the Jesuit faction did not ‘officially’ exist prior to the 16th century, the ideals and concepts were in use throughout the Dark Ages. Only once the human renaissance was threatening to liberate the consciousness of the West did a specific task force get created by the Farnese Black Nobility family to maintain the control over the minds of those in Christendom.

In modern days, they rely heavily on cutouts to do their dirty work so the ultimate agenda is never able to be fully understood. But higher level operatives who are NOT cutouts exists within the Knights of Malta (SMoM) and 33rd degree Freemasons.  These are also dangerous negative beings part of the Jesuit faction.

They specialize in fear, deception, and maintaining the control matrix via whatever means possible. This means compartmentalization of key Intel and creating confusion via cognitive dissonance.

On our plane of existence, confusion is easy to convert into fear – especially for those who understand the relationship between human consciousness and the Earth’s energy grid. 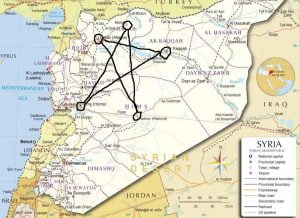 In the featured image of this article (shown again below), one can see how these energy vortices affect global ley lines: 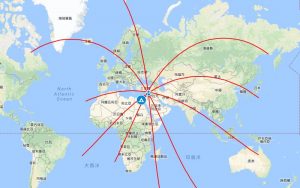 The map above was created by Taiwanese light-workers who specialize in focusing their intention on healing the Earth’s energy grid.  I will quote several statements of one of these persons below:

When you extend all five lines outward, you will see a new picture about mass consciousness works. Once you take a closer look, the ley lines (drawn outward from the) Syria pentagram can connect three major religious cities: Jerusalem, Mecca and Medina.  Plus, you have (the) Great Pyramid aside as a planetary ‘Base Station’. Whoever controls Syria pentagram controls Christianity, Judaism and Muslim. Generally speaking, you can decide the fate of half surface population. 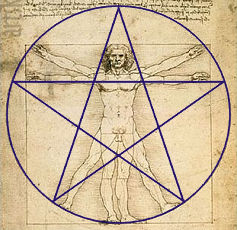 Now for all of you ‘God-fearing Christian’ types who view any pentagram as inherently the symbol of dark occultism, look at the image above.

The occult intention of a pentagram is ‘usually’ positive if the top has a single point; it’s the inverted pentagram which has been misused to represent Devil Horns which has negative occult energies.

There is no point in presenting this information if it all falls upon deaf ears or blind eyes. The thesis presented above is quite clear:

The Syria missile attacks were intended to create fear in the population near the intended targets (regardless of whether they were publicly stated).

This fear is energized by each of these vortices and travels along the various ley lines to keep the devotees of the major monotheistic religions of the world – Islam, Christianity, & Judaism – in a constant state of fear regarding a potential “Holy War” which exponentially spirals into WWIII resulting in a nuclear holocaust causing humanity’s extinction.

This is a harsh thesis, but I am ONLY stating the intention of the dark forces mandating this attack – who are working via the Jesuit & “Knights of Malta” agents who are heavily present within the Trump administration… and have been present in the U.S. for centuries.

You see, the previous “POTUS” – Barack Hussein Obama – was also a Jesuit controlled cutout. His handler was the now-deceased Zbiginew Brezinski. Comparatively, for Trump the Jesuit influence is much more subtle yet counter-intuitively more pervasive and influential.  Within the Obama administration, it was much easier to see the obvious machinations of the Jesuits (Arab Spring, Maidan Revolution). Within the Trump administration, it’s much harder to see which makes it much more effective.

Although I do not agree with MANY of the concepts presented in this book/PDF (he fails to understand the positive influence of the Medicis and also completely ignores St. Germain completely regarding the “Declaration of Independence” and “U.S. Constitution”), I highly recommend reading “Rulers of Evil” by F. Tupper Saussy to understand the bizarre mentality which underlies Jesuit strategy. The facts may not be 100% accurate, but the mindset of a high-ranking Jesuit operative – especially that of the “Black Pope” is spot-on:

Also, I will reference this article (3 links provided below) describing another ‘Pentagram’ of true evil which existed during WWII. The Pentagram is a very powerful occult symbol – especially when incorporated into Earth’s energy grid and its effects on human consciousness:

The purpose is to educate – NOT to induce fear. This means that people will need to recalibrate their paradigms a bit.

Instead of focusing solely on being a ‘truther’ or a ‘prepper’ – it is time for people to meditate and visualize the future they want to see instead of living in fear of Armageddon and human extinction.

Humanity will not – and CANNOT – be eliminated fully if a critical mass of people declare consciously that their intention is for a better future without war, poverty, and other forms of unnecessary suffering.

This is why the infiltration of the alternative media by the Jesuits has been so important… and so successful. By constantly creating fear and hopelessness in people, we reinvigorate the ‘archon control grid’ by giving it the food/fuel it needs to sustain itself. One of the most effective tools is when a false “White Knight” is created via illusory hope and brought down to Earth via scandal, betrayal, and compromised morality.

This effectively neutered the Obama administration from any long-lasting positive effects – and the same playbook is being used today in the Trump administration, but focused on those on the opposite end of the political spectrum within the U.S. and even globally.

The only way the madness ends is for us to reject political duality and see things as they truly are – that the same control structure benefits no matter who is publicly ‘in power’ – because the control structure will simply NEVER allow a true threat to their control to be in a position to influence events in a way that brings them down. They came VERY CLOSE to that with John Fitzgerald Kennedy, and assassinating him in broad daylight their way of reinforcing that they are still “very much in control and will remain in control”.

The answers to the problems of our world lie in human consciousness: humanity needs to be open and accepting of truth even if it is not what they wish to hear. The people who are most resistant to those truths are sadly those who are part of the 3 major monotheistic religions.

If you wish to change our reality, participate in the meditation listed at the link in the beginning of this article and encourage others to do the same.

We fail to grasp the power of our emotions and our intentions in shaping the future – it is time for us to take back our sovereignty and claim what has been kept from us for millenia:

Peace, truth, equality, abundance, and genuine human compassion.  This is our future – if we choose grasp it.